FPT was awarded the world record for "Connecting Journey" of 3,000 employees running across Vietnam in 31 days.

On September 30th, 2018, FPT was honored to receive the world record "National Cross Run Award organized by the company with the largest number of participating managers and employees on the longest running route" for the program "Connecting Journey" from WorldKings. 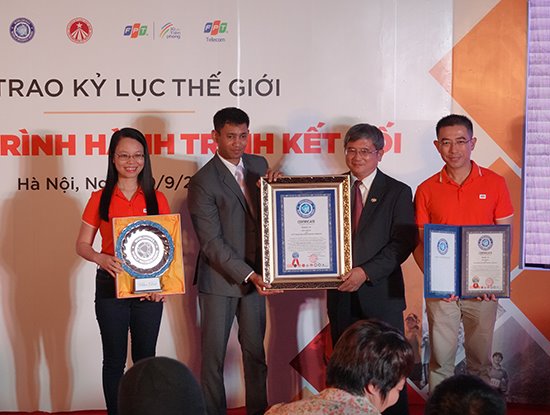 WorldKings awarded FPT with the world record for the program " Connecting Journey ".
"Connecting Journey" is a cross-country relay race of 3,000 FPT members lasting 31 days to celebrate 30 years of establishment of FPT. The journey represents the pioneering spirit to overcome new limits and challenges that has always been the guiding star during the past 30 years of FPT development.

On September 4, Vietnam Book of Records (VietKings) – the only Record organization in Vietnam awarded Vietnam Record for FPT in two categories: “The longest running relay (2,600 km)” and “The largest number of athletes in Vietnam (3,000 people)”.

Being impressed by the great ideas, united and persistence spirit and efforts of 3,000 FPT members as well as wishing to further promote Vietnam's record values to the world, VietKings has offered and supported FPT to register for the World Record and deliver the presentation to WorldKings Council. After days of appraisal, WorldKings announced to award the certificate of World Record for the Connecting Journey of FPT.

Dr. Duong Duy Lam Vien – Secretary-General of Vietnam Record Association cum CEO of VietKings said: "As the only Record organization in Vietnam, we are happy and willing to support any individual or any organization who dares to think, dares to do, dares to be different to conquer and create new values, especially those contribute to the introduction and promotion of the image of Vietnam and Vietnamese people. Having been working with the FPT team from the beginning and appointing two VietKings experts to directly participate in and monitor daily developments during 31 days of the journey, I am really touched by the aspirations, efforts and results that FPT Group achieved. We have demonstrated to WorldKings Council that Vietnam has great records coming from great ideas and spirit to overcomes all challenges."

Ông Biswaroop Roy Chowdhury - Vice President of WorldKings commented: “WorldKings recognizes the records and appreciates the top values that an individual or a team attempts to make. It sometimes takes a month or a year, but sometimes takes a whole life to accumulate and achieve. We also encourage individuals and organizations to set new records that are meaningful and able to convey the humanitarian message to the community. And the record that FPT made is very impressive.”

The journey spans across 29 provinces and cities starting from km 0 at Lang Son Friendship Port and ending at Cape Ca Mau. FPT flag has been raised by athletes across 2,600 km along the length of the country. Mr. Bui Quang Ngoc – CEO of FPT Group said: “The Connecting Journey has re-enacted the completion process of the North-Southvbackbone route extending from Lang Son to Ca Mau that FPT performed with an incrediblevspeed in a record time of 9 months 10 days to bring Internet to all the regions in the country. During the 30 years of development, thousands of FPT members have always been the pioneers no matter what and have overcome many challenges together. These pioneering spirit, intense determination and persistent perseverance of a team full of intellect and creativity have molded FPT as it is today. We are proud that the efforts of the Connecting Journey have been acknowledged by the world and have supported our determination to become the world's leading digital conversion company.”

World Records Union (WorldKings) was established in 2015 with 15 founding members and the headquarter located in New Delhi, India with the aim to honor cultural, spiritual, and historical values that set the records for the world. From 2015 to 2018, WorldKings awarded 30 world records in Vietnam.